As reported in the recent Snake Bytes, a contingent representing the Viper 640 Class Association and Rondar Raceboats traveled to Biloxi, MS, the weekend of January 9-11 to present the Viper to the Gulf Yachting Association (GYA). The GYA is looking to replace their Association-sanctioned one-design, the Flying Scot, with a sport boat. Each GYA club is required to own at least one of the Association boats so they can compete in the GYA’s major Capdevielle regatta series. What happens is that the clubs end-up purchasing multiple boats (some as many as six or eight) which would be a boost of 50 – 100 boats for whichever class is selected as the new boat. After a lengthy review, the GYA has limited consideration to the Viper and the VX One.

Included in the weekend’s Viper team were owners Craig and Deb Wilusz plus Don and Tracey Faircloth, both of whom are members of GYA clubs. Don and Tracey brought their Viper which was set-up in the club’s parking lot for all to see and inspect. Representing the Class Association was Class Administrator Buttons Padin and the Rondar representatives included CEO Paul Young (who traveled from the UK for the meeting), Dan Tucker, and Juan Mauri. 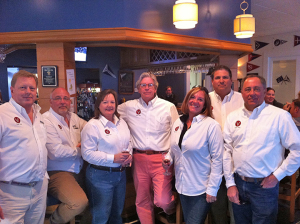 Friday and Saturday were spent with the team presenting the boat to the respective GYA Commodores and others in the GYA Capdevielle decision-making process. Sunday was the formal presentations to the GYA Board by both boats’ representatives. The Viper presentation was first and the combined talents of the team did an excellent job explaining the boat, the Class Association, and the strong relationship between the Class and the builder, Rondar. Capping off the presentation was impactful commentary from the Viper owner’s point-of-view given by Deb and Craig Wilusz. While the earlier part of the presentation solidly presented the core underpinnings of why the Viper should be the new Capdevielle boat, Deb and Craig’s commentary explained how and why the Viper can be used beyond the Capdevielle by young and old, racers and cruisers, one-design or PHRF, friends and families.

In the end, the Viper presentation did a superior job of substantiating why the Viper should be the next GYA boat and, although the final decision won’t be made until September 2015, the Viper is well-positioned as the process moves forward.

Dan Tucker had the Viper presentation video recorded and every decision maker in the GYA Capdevielle review has received a link to this video. Here’s the link for the video so you can see it, too. HERE

Rondar will have four Vipers in the GYA area over the coming months with the intention of having them sailed in major GYA regattas with combinations of Viper and GYA sailors. The first will be GYA Opening Regatta, May 2-3 at the Fort Walton Yacht Club. This will be the Viper 640 Gulf Coast Championships. If you would like to travel to the Gulf for this or any of the upcoming GYA regattas and sail one of the Rondar boats, please contact Dan Tucker at Dan@rondarboats.com.