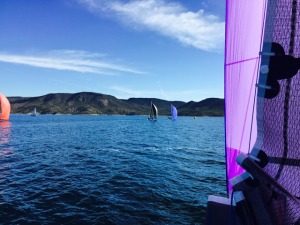 The view from Viper 212 Boiling Point.

The 55th Arizona YC Birthday Regatta and Leukemia Cup was the first event of the Viper 640 West Coast Winter Circuit, held during Martin Luther King Day Jr. weekend at Lake Pleasant, 40 miles north of Phoenix.  The event is known for its beautiful desert scenery and its usual “festival” vibe, including the annual “mini-bar” hosted after the racing on Friday by Kelly and Billie Beaver who poured enough rum drinks to make sure everyone was relaxed and happy.

The event saw 13 teams, with an even mix of local and out-of-state boats in attendance.  Over the three days of racing, the winds for the start of the first race were good, but quickly lightened to provide challenging conditions for everyone involved.  In fact, each day ended with everyone getting out their paddles to make it back to the bar in warm and sunny conditions. 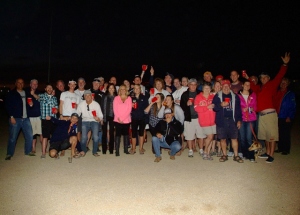 The fleet partying in the desert.

The 3-day multiclass regatta saw three different daily winners in the Viper fleet.  Day 1 saw local Greg Jackson (Glittery Lake Princess) with his regular crew of Chrisann Tortora and John Mayall get off to a good start with a 2, 1 to win the day.  Day 2 allowed for 3 races, with another Arizona local Court Roberts winning the day with a 1, 1, 6, as well as the separate Leukemia Cup Regatta held that day.   However, on Lake Pleasant, consistency pays in the difficult lake conditions.  Roberts won the first race of Sunday, his third win in six races, but also had a sixth and a seventh.  Ed Feo’s Locomotion team from Alamitos Bay Yacht Club hadn’t won a single race, but scoring no worse than a fourth, only trailed Viper 133 by four points, with Roberts holding the tiebreaker.  Feo’s only win of the series in the final race was well timed, and when Roberts’ Hyper Viper team crossed the line sixth, it was enough to give Locomotion the regatta win by a single point.  The final podium position went to Tim Carter and his Team Cobra crew.

“Sailing at Lake Pleasant is fun– windy in the morning, warm in the afternoon,” Feo explained. “Arizona Yacht Club is laid back and welcoming.  We did well by avoiding disaster. The competition was terrific– lot of lead changes, significant changing of positions in each race. This is the third year we have done this regatta, and it’s definitely on our calendar for next year.”

The regatta featured one of the newest and one of the oldest Vipers in the United States.  New owner Peter Graves from Post Falls, Idaho took delivery of Hull #229 prior to the event and quickly demonstrated that he will be a factor in the racing in a very short time.  Original Arizona Viper fleet member John Riddell also managed to drag Viper #21 out of the barn for the weekend.  Additionally, Craig Walker set a new Viper speed record, hitting 81.68 knots on the way back to Southern California with Viper in tow.

Class Treasurer and Arizona mainstay Tony Chapman continued his Leukemia & Leukemia Society fund-raising efforts during the weekend.  He received some very generous donations in his efforts to qualify for the LLS Fantasy Sail in Bermuda later this year.  If successful he will provide a full report to the Class on the venue for the North Americans in 2016.

Final results are at www.arizonayachtclub.org/wp-content/uploads/2015/01/2015-B-Day-Regatta-Final-.html

You can check-up on Tony Chapman’s efforts to support LLS and attend the Leukemia Cup Regatta Fantasy Sail with Gary Jobson in Bermuda at:  www.leukemiacup.org/pages/az/ayc15/achapman