Vipers from all over Ontario and a new owner from Detroit made up the 12 entries at our first 2021 official two day Viper regatta, hosted by the Nepean Sailing Club in the country’s capital of Ottawa, Ontario Canada.  The forecast was calling for 15 knots on Saturday and less than 5 for Sunday which sounded like a good introduction for 3 new Viper owners’ first regatta.

The majority of the people arrived on Friday, with the furthest travelled boat “Surf” having come a whopping 1500km or 17 hrs of drivetime from Thunder Bay.  Surf (“Drey” Audrey Dallaire Gagnon – 74) was hoping to get in some training for the female crew for the Women’s North American’s in Noroton. Unfortunately while sailing out to the race course on Saturday they noticed an issue with the keel hold down bolts and decided to retire to prevent any further damage to the boat until a proper repair could be completed.

Saturday showed up with a vengeance with 25 knots of breeze, 4 races, many broaches and lots of smiles!  If you are going to learn to sail a Viper, it might as well be in 25 knots of breeze!  At the end of the day, Oshunmare (Steve Chapman-288) was in first with 3 bullets and a 3rd place finish, Northern Honey Badger (Brian Johansen-292) was in second place with 8 points and All fruits Ripe (Marina Maffessanti-127) in 3rd with 14 points.  Everyone came off the water, headed to the Viper pit and were greeted with a delicious frosty beverage.  The epic experiences of the day were the hot topics, focused on how everyone tuned the boats, how to depower and how much fun the Vipers were on the race course.  Wadjet (Van Sheppard – 211)  ended the day with the top speed of 17.2 knots and averaging 15.5 downwind.   After all the boats were cleaned up, we had the typical Viper de-brief on handling and tuning and discussed the upcoming North Americans.  Northern Honey Badger may have mentioned a few times the importance of the tuning guides as a starting point for rig tune.  We discussed Surf’s keel issues and the lengths they had travelled to get to this regatta and without hesitation the group was able to place Surf’s crew on different boats to race on the Sunday.  With all the Covid protocols in place, individual BBQ dinners were served outside and everyone in the Viper pit continued in deep conversations about life, regattas and lessons from the day.

Sunday’s sunny weather brought a much lighter 5-7 knots from the north. The lighter conditions meant eveyone’s burned out legs from hiking got a well deserved rest.  Race committee started right on time at 10am to get the first of 3 races off before the wind turned off at 1:30pm.  The right side of the course was heavily favoured and with everyone aware of that, boat handling, boat speed and crew communication was the focus for the day.  Northern Honey Badger had two bullets and a third place which landed them the top spot, followed by Oshunmare with a 3rd, 4th and 6th (drop) for a second place overall followed by Van Sheppard and his two sons in third place with two 2 second place finishes and the final race win of the regatta landing them a third place overall.  The hospitality and friendly nature of the Nepean Sailing Club makes this annual event one of the Great Lakes premier regattas and hopefully the location of a future North Americans. 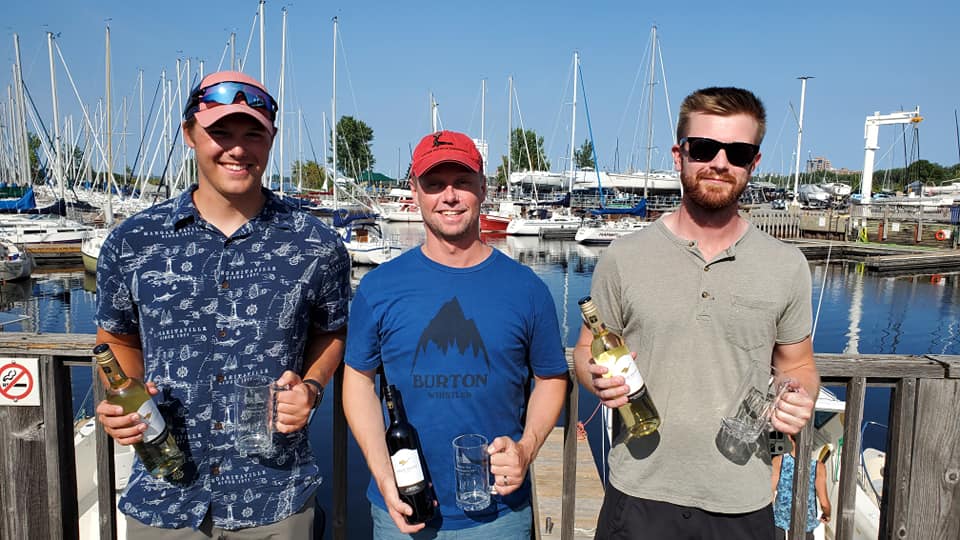