The Viper 640 Class New England Championship was sailed over three days during the 2014 Sperry Top-Sider Marblehead NOOD Regatta sponsored by Sailing World. A total of nine races were sailed but the final results would not be determined until the very last race.

Friday’s racing was delayed over an hour due to lack of wind. When it did fill-in from the south, the Vipers were able to get in three races for the day. In each race, Marblehead native and now Charleston, South Carolina resident Viper sailor Tom Loutrel, sailing with John Bowden and Karl Schutte aboard Viper 221 Choppy Seas, took the gun in light air races sailed over sometimes choppy seas. Following Loutrel in second for all three races were co-skippers Moise Solomon and Dave Nickerson sailing with sister Sarah Enright. This pair of boats would set the tone for the remainder of the regatta despite the diligent efforts of Peter Beardsley who was sailing withColin Santangelo and Rachel Beardsley. 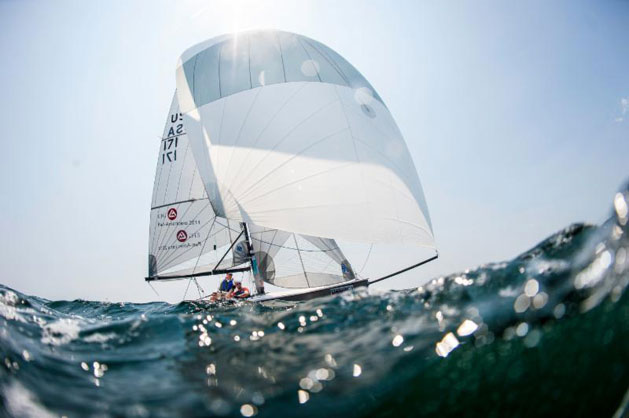 After racing, North Sails ran an organized debrief with Andreas Josenhans, Chuck Allen, Brian Hayes, Will Welles, and Doug Slocum, complete with photo and video analysis from the day’s racing, which helped everyone up their game for the rest of the weekend, though the fleet did their best to forget what they learned at Maddie’s Sail Loft later that evening.

Saturday’s racing started on time with winds building and softening throughout the day. The highest winds registered were in the low teens as the Corinthian Yacht Club race committee completed four races for the Vipers. Fourdifferent Vipers won the four races, and Beardsley and Nickerson/Solomon tied for first on the day, but after six races, it was still pretty much a two boat regatta with Loutrel enjoying a three point lead over Solomon/Nickerson going into the final day’s racing.

Sunday started with sun and a light breeze but the forecast was for major thunderstorms to roll in during the early afternoon. The fleet went out to the course to be met by grey skies and rain as the RC started the eighth race. The occasional sound of thunder could be heard in the distance to the southwest, but the RC’s close eye on the radar allowed them to get off the final two races. The leaders banged right off the line in Race 8 in full hiking conditions and big waves in hopes of finding a forecasted righty and less chop in a rapidly building sea state. Loutrel led Nickerson/Solomon out of the right corner, and built his lead around the course to take the bullet and a one-point lead going into the final race, along with a big tie-breaker advantage in favor of Loutrel.

With the winds lightening and other fleets sent ashore after only a single race, the RC opted to send the Vipers and J70s on a ninth race despite the approaching storm front. Several boats tangled in close quarters on the heavily pin-favored line, with Loutrel being slowed the worst. Class Governor Justin Scott took the lead from Beardsley halfway up the beat after forcing the Class President to the right just before the wind clocked left 25 degrees, allowing Scott to win the final race. Nickerson/Solomon held on for second, and when the RC radioed that the race would be shortened at the leeward gates, the question was whether Nickerson/Solomon would be able to keep two boats between himself and Loutrel. A wild scramble at the gates saw Loutrel drop back to sixth, running out of racecourse and giving Nickerson and Solomon the 2014 Viper New England Championship by three points. Beardsley defended his third place position with two thirds the final day. 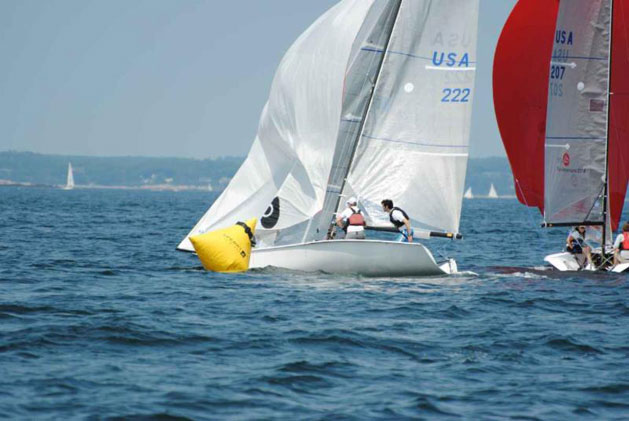 As the rains came in and the wind died totally, the Vipers were the last boats on the course and appreciated the RC coming along to tow everyone to safety in the downpour.

Loutrel summed-up the weekend saying, “It was great regatta with challenging conditions: light and shifty winds with current and chop. There was a lot of close racing and tights starts. The weather was sunny and beautiful with exception of Sunday. That was a tough last race, after a great weekend of sailing, I’m not sure that was the best race to decide the regatta; but it was the same for everyone.”

Nickerson noted that “Those guys are really good and have come up to speed in the Viper very quickly. They were really fun to sail against. What was also fun is that out of nine races six different boats won at least one heat indicating how close the racing really was for the overall fleet.”

While the key action was at the front of the fleet, there was also a lot of competition in the middle of the pack, too. Jeff and Doug Slocum finished in fourth with line scores including a win in Race 7 followed by local sailor and Viper Governor Kay VanValkenburgh in fifth. VanValkenburgh sailed with Karen Kingsbury and Buttons Padin and took the gun in Race 4. The win in the final race went to the other Viper Governor, Justin Scott, sailing with Patrick Slattery and Nicole Stuart.

It was a fun regatta with lots of close racing in diverse and challenging conditions. Next on the calendar for the Viper Class in the northeast is the Great Lakes Championship and Canadian National Championship to be sailed during the CORK Olympic Classes Regatta in Kingston, Ontario from August 16-18.