As reported by Brandon Folkman

From June 28 to the 30th, I had the privilege of racing in the always competitive Viper 640 fleet at the largest regatta on the West Coast, Long Beach Race Week.  As always the event, co-hosted by Long Beach Yacht Club and Alamitos Bay Yacht Club, delivered.  With 14 Vipers, great breeze and, of course the always enjoyable Mount Gay Rum after-parties, the weekend was a blast.

For me the event basically started the weekend before, when my dad, Mark Folkman, and I raced our Viper #130 in a King Harbor Yacht Club Regatta from King Harbor in Redondo Beach, CA down to Cabrillo Beach YC in San Pedro.  We sailed double handed in PHRF, hiking for 5 miles upwind in 12-15 knots of breeze to Palos Verdes Point with all of the old heavy PHRF boats rolling right by us (not fun). However, we had our revenge soon after we turned the corner and rocketed downwind at a pretty consistent 12 knots right by every boat that passed us and ended up correcting to second overall (very fun!).  Because Long Beach was only a few more miles, and the breeze was still up we ended up continuing down to Long Beach completing the delivery for Long Beach Race Week, 25 miles in total.   After a short week of work and wishing I was sailing instead, we were ready to start the regatta.

Friday originally seemed like a typical Long Beach day with breezy conditions; however, we soon realized that our expectations would be exceeded.  Breezy turned nuclear by the time our start came around, and we were able to get in two three-lap races.  The upwinds were challenging, as everyone was way overpowered and hiking as hard as they possibly could to keep the boat moving forward.  We were often questioning why we do this “sailing thing” voluntarily, yet by the time we got to the top mark and started hitting consistent 13’s and 14’s on the knot meter, it was all totally worth it (our personal highlight of the day was hitting 16 knots with the kite up in the harbor on the way in).  After the two races on Friday, it was clear that the local Kevin Taugher’s “Hot Mess” out of ABYC would be the boat to beat.  Taugher’s upwind speed in the breeze was phenomenal and it always seemed as though he was the flattest boat on the course. 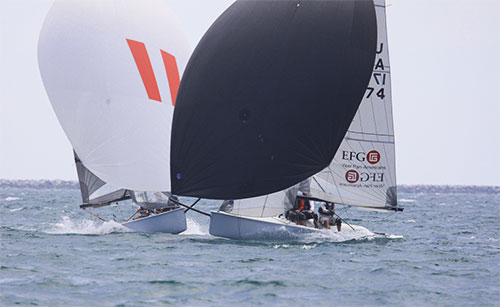 On Saturday we swapped courses with the J70’s and raced out in the real ocean outside of the Port of Long Beach.  Where Friday seemed to be typical Long Beach conditions, Saturday was anything but typical.  We had squalls turning into light spots with rain (in Southern California?), turning into massive wind shifts from directions that are usually unheard of in Long Beach.  Towards the end of the day, it seemed as though the wind gods were completely messing with the Race Committee.  At one point after being delayed for about 45 mininutes, a consistent wind direction of 300 degrees prompted them to try to start a race.  As soon as the warning gun went off, the breeze shifted right back to 210 and the race was quickly blown off.   The classic saying, “It’s never like this here…” never rang more true.  In fact, the only thing that seemed typical of the ocean course in Long Beach was the kelp, and we got A LOT of it.

Needless to say we didn’t really have the best results on Saturday, but we did learn once again that kelp is not fast (who knew?).  Taugher and the guys on “Hot Mess” apparently did know that, because they had another great day, along with Jeff Grange and his crew on Venom out of SBYC, who were able to steal a bullet from Taugher in Race #4. 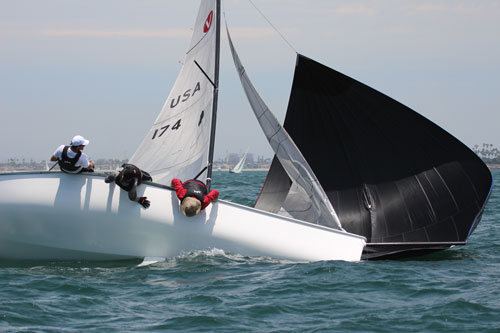 The final day left two more races on the schedule and we were to race back inside the break wall.  A nice easy 12 knots turned into 15 plus by the time our start rolled around, and it was back to the heavy hiking and rocket ship downwind sailing that we had the first day.  This time around, Jeff Grange rivaled Taugher’s upwind speed, and the two had some very close racing up to the top mark.  The rest of the fleet was very tight and the downwinds were hectic as always with boats closing in on the bottom mark at around 12-13 knots.

In the end, Taugher and Grange split the two races each taking a second and a first.  Taugher’s domination of the previous days allowed him to take the overall win with only nine points out of seven races.  Grange took second with 16 points, and Alex Steele out of Balboa YC took third with 26 points.  After our horrible day Saturday we still managed to pull it together on Sunday and take 6th place.  Overall, it was a great regatta in an always fun fleet. 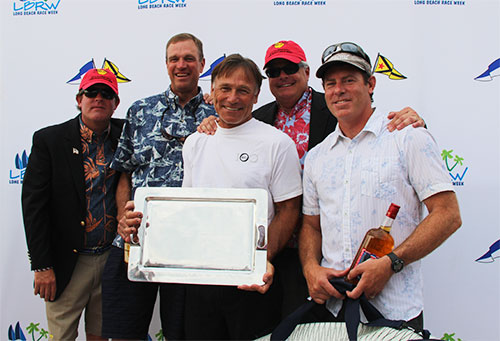 A HUGE thanks to LBYC and ABYC for hosting, Tim Carter for helping ensure the Vipers had enough dock space at ABYC, the race committees on both courses (especially those working on Saturday keeping us on schedule in the wacky breeze).  Also thank you to my team, Mark Folkman and Ryan Davidson, and congratulations to Kevin Taugher and team on “Hot Mess” for the almost flawless regatta.  I can’t wait to get back out on the water in a few weeks with this fleet in Santa Barbara!