Santa Barbara (CA) Yacht Club and local Viper 640 sailors Jeff Grange and Geoff Fargo hosted the SoCal Viper fleet over the weekend of July 18-19 at its Fiesta Cup that fully lived up to the promises made by the hosts. Everyone was provided with sunny and breezy conditions, a club house and bar on the beach, Volleyball court, beer kegs, food, rum, and a great live band. In fact the promises made were so good that an uninvited guest by the name of (Tropical Storm) Dolores crashed the party and caused a little mayhem. Dolores invited her friends Rain and Fickle (winds) to make the party a little more challenging.

Attendees were welcomed on Friday evening with a beach party to get everyone in the mood for a great weekend. The racing on Saturday saw Jeff Grange and Team Venom sail well to take a lead into Day 2. Saturday evening Dolores forced the party to move inside but the band and libations kept everyone entertained well into the evening. There were some very green sailors on the dock on Sunday morning.

Going into the final race on Sunday the 2 local boats and SoCal governor Timbo Carter were separated by a single point. Team Venom reclaimed its prior form for the last race to claim the top position for the weekend, ahead of Team Timbo and Geoff Fargo / BOOMSLANG.

SBYC provided a fantastic location and facilities that everyone should take the opportunity of experiencing. I will definitely be returning next time we are invited as the facilities and welcome provided by the hosts was as good as it gets. 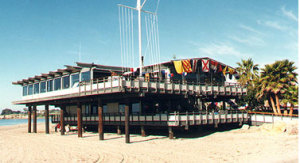 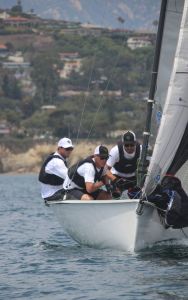 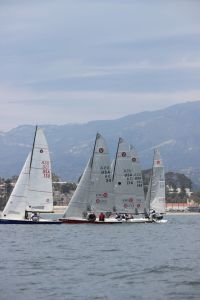