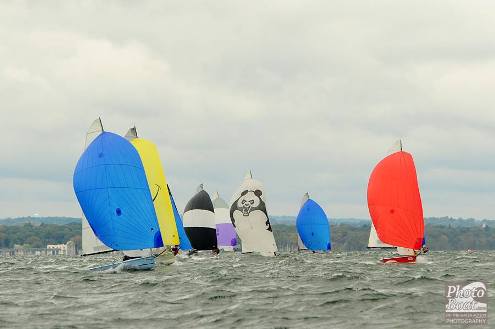 The High Performance Dinghy Open, better known as the “HPDO” has a slogan: “Great racing, great friends, great beer.”  Usually all of these things are present for the Viper 640 Class, and the 2014 edition was no exception: 30 boats competing in 8 races over two days, with the leaderboard constantly shuffling and 15 teams posting at least one race result in the top 5, a post-dinner fleet debrief that took over the bar at American YC, much to the surprise of AYC’s members, and plenty of mini kegs of Heineken.  Normally saying that the beer was warmer than the air temperature would be a major insult to the beer, but Saturday started with driving rain and unseasonably cool temperatures to cause some to reconsider their apparel choices a year in advance of the North Americans, to be sailed in the same waters at the same time of year.  The water in fact, was warmer than the air, which was a relief to some when the stiff easterly chop driven by an ENE breeze gusting into the high teens washed a wave over the boat.  The sun came out by Race 4, by which point local Jay Rhame and his team aboard Flux Capacitor had gotten off to a quick start with a 2,1,1.  Bermudians Somers Kempe and Butch Agnew and defending North American champs Brad Boston and Lee Shuckerow won Races 4 and 5 respectively to round out the top 3 heading into the final day. 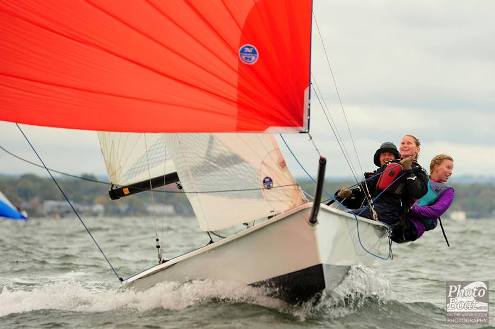 Jeff Hankins and the Dragon Ladies saying “this is really warm compared to Maine.”

Sunday brought sun and a dying breeze that started off around 12 knots.  The short courses with legs of 0.7 nm, tight competition, and shifty shore breeze bounced teams all over the scoreboard.  Dave Nickerson and Moise Solomon won back-to-back races, moving them up to fifth overall after a tough first day.  Jackpot jumped into the lead when Rhame got trapped on the left side of the beat on Race 6, and locals David Owen and Peter Beardsley on Ghost Panda jumped

into second overall by a point after Race 7.  Race 8 saw even lighter winds with leftover chop and big shifts that kept the Race Committee busy moving marks.  Recent U.S Naval Academy graduate George Prieto and father Rich capped a strong regatta with a Race 8 win to move to sixth overall, with Jeff Hankins and Team Dragonfire rounding out the top 3 for their first podium results of the series.  Jackpot and Flux Capacitor finished neck and neck to end 1-2, Jackpot’s first HPDO win since the 2010 event, and Rhame’s first ever HPDO podium result and giving Rhame the overall 2014 Western Long Island Sound Circuit title.  The Bermudians avoided the holes to pass back Ghost Panda for the final podium spot.

In 2015, the HPDO will take place the weekend prior to the North Americans, three miles from the NAs host venue at Larchmont Yacht Club, and a huge Viper turnout is anticipated.  Results and photos, all of which are courtesy of our friends Allen and Daniela Clark at Photoboat.com.