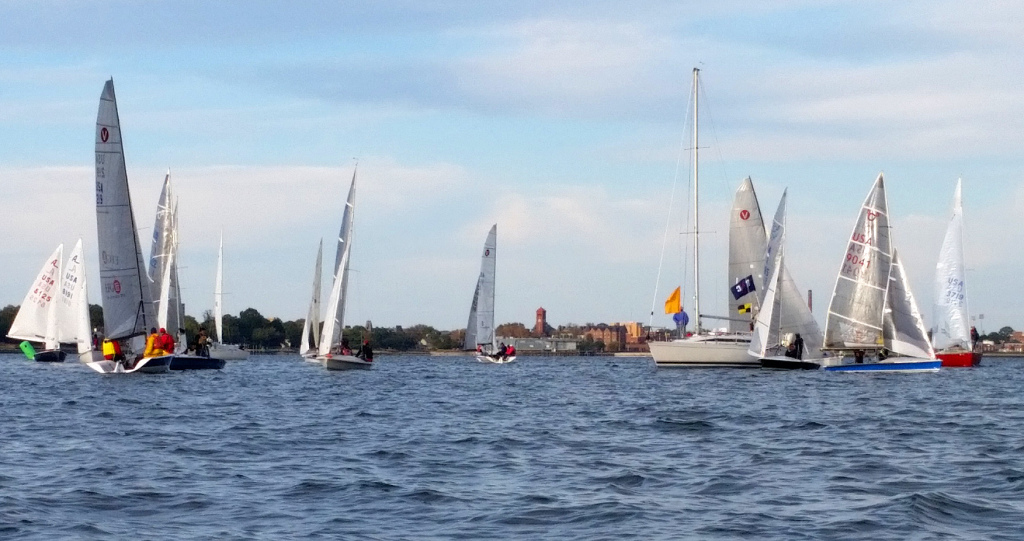 Until 2014, there weren’t many good options for Viper racing in the northeast after HPDO Columbus Day weekend.  And that’s ok – the weather gets colder, the days get shorter, and people start itching to sail even smaller boats for frostbiting, go skiing, or just hibernate.  However at least for me, when given the option between putting the Viper away for the winter in the northeast versus traveling south to get in one last regatta, the choice seems easy.  Make it so that the drive is less than seven hours away, throw in an oyster roast, and I’ll almost forget that half the drive is in a state where radar detectors are prohibited.

Hampton YC is home to one of the fastest growing Viper fleets on the East Coast.  The fleet doubled in size in early 2014 with the addition of two Miami event boats, added a fifth in early October, has a sixth on order, and a few other prospective orders percolating.  There’s a lot to like about Hampton.  There are marinas and masts everywhere.  There’s usually wind.  There’s plenty of boat storage, and it’s a short sail to the race area in Hampton Flats.  The clam chowder has bacon in it.  The beans have extra bacon.  If you don’t look carefully, there may be bacon in your yogurt.  Plus there’s grits, biscuits and gravy, and an excellent Saturday night oyster roast around the corner from the Club.  Plus, it’s 7 hours closer to Sarasota and Miami than New York, with indoor storage available for a couple of months while setting up multi-boat trailers to go further south, which sounded appealing.  Event chairman Steve Taylor, owner of Viper 220, didn’t have to twist my arm too hard when offering up free housing and a good time to convince me to make the trip.  The Vipers made up the largest fleet at the annual HYC Fall Fling, with 10 teams in attendance among several 505s, J/24s, Lightnings and Albacores.

I sailed with an HYC member curious about Vipers, Ron Thompson, who described himself as a Damn Yankee.  Ron told me that I am just a Yankee.  Both of us being native New Yorkers, I asked Ron to explain the difference.  “A Yankee goes home after the regatta.  A Damn Yankee stays.”  Ron moved down to southern Virginia and stayed, and got back into racing a few years ago, frostbiting Lasers and sailing another sprit boat that of undetermined sportiness that shall not be named.  I figured he could take the helm, and WLIS forward crew Carolyn Blackmar and I could coach him around the course and get the sails up and down. 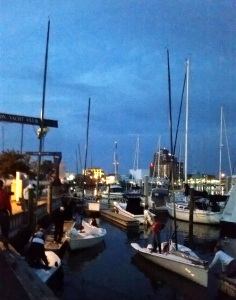 Conditions were light for the weekend.  A mix of the classic “it’s never like this here” and “you should have been here yesterday.”  The Vipers who showed up Friday planed around the Flats before retiring to the HYC junior clubhouse for chowder, grilled cheese and beer.  Saturday saw a postponement on the water for an hour waiting for the ESE seabreeze to fill.  When it did, we got off the line, playing the middle left to lead at the first mark, with Doug Mroz’s South Jersey team hot on our heels.  We made the decision to gybe away from the pack in search of breeze, which was not our best decision (nor Doug’s as he followed), as Annapolis Rondar rep and pro Geoff Ewenson continued on starboard to sail around us both to lead at the leeward mark.  On the final run, the newest U.S. Viper, # 227 sailed by HYC Commodore Emeritus Dave Eberwine and one of his co-owners, Doug Amthor sailing with soon-to-be-Hampton-owner Mark Wheeler, learning that it pays to get into the low road in lighter conditions, passing us for the two.  Race 2 was lengthened…a bit too far, as a few 505s from the first start showed why centerboards have their benefits, and a couple of Vipers mistook the “Hampton Bar” designation on the chart for a local watering hole and not the unmarked sand pit that it is.  Race 2 was thus abandoned on the first beat, and once all boats were able to return to the starting area on a slightly shorter course, Ewenson and company got to work, leading wire-to-wire, though we did our best to make it interesting for them by finishing less than a boatlength behind.  227 finished third, and Hampton Rondar rep Tyler Moore’s boat 181, helmed by wife Jane and crewed by young son Parker, finished fourth.  The full moon rapidly rising, the fleet made it back to HYC by dusk to enjoy the annual oyster roast, hosted a few blocks from the Club at an HYC member’s home, where we took over the lawn.  No one gorged themselves on oysters, passed out in the woods, fell into a creek, or met any poisonous snakes, though all of those things seemed possible and we had a lot of fun commiserating with competitors from the 505, J/24, Lightning and Albacore fleets.

Sunday brought the hope of better conditions, though the first race was sailed in the lightest wind of the weekend with an adverse tide, with Ghost Panda rounding the windward mark in the last puff of wind and ghosting to the finish along the tide, crossing the line on the shortened course before a second boat even rounded the weather mark.  Three other teams ultimately finished before the time limit ran out.  Thankfully the wind clocked and filled to allow for two more races.  The fourth race ended up deciding the regatta, as we only trailed 201 by a single point, and they found themselves deeper in the pack in the steadier, boatspeed conditions, finishing seventh after another Ghost Panda bullet.  With the time limit to get in a sixth race (and the discard that would come with it) dwindling, we knew the fifth race would be our last, and tried to stay within five points of 201, though we made that hard on ourselves being too conservative off the line and 201 winning the pin and taking a big lead at the windward mark, and a lot of other teams showing speed by the final race of the regatta.  We rounded the windward mark in sixth, but passed a few teams on the runs with some fast gybes to hold on to the overall lead and win the first-ever Viper MidAtlantics.  The guys on 201 were really quick to place second, Dave Eberwine’s team was third, and Paul Zinger sailed an outstanding final day to finish second overall on the day and fourth overall at the regatta.  Results are posted on the forums at http://forum.viper640.org/index.php/topic,1799.15.html 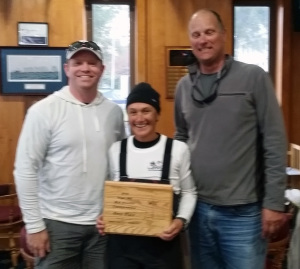 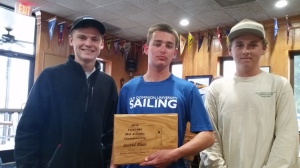 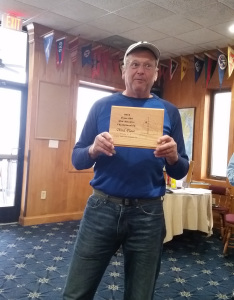 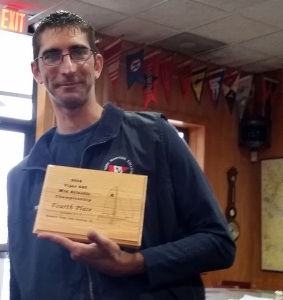 It was a light air weekend everywhere on the east coast.  Knowing that my boat has been someplace warm for the last month while waiting to be shipped the rest of the way to Sarasota has helped keep me excited for the 2015 season.  Hampton will have more regattas in early spring and late fall each year to take advantage of its warmer location and hopefully more northeast U.S. teams will make the trip to meet up with new friends from down south. 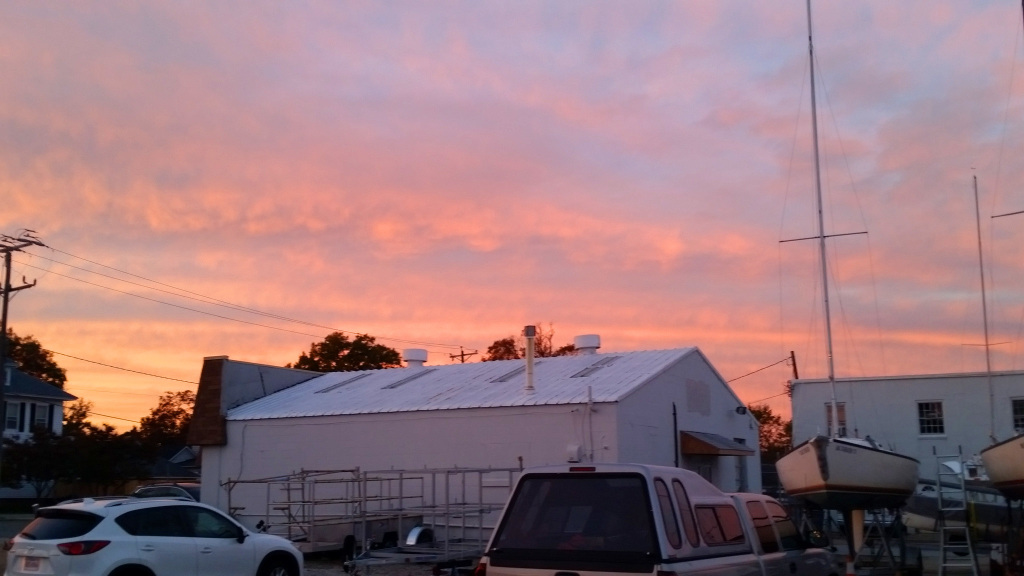