This past weekend marked the beginning of the holiday season in Sarasota:  The Viper Fleet has arrived!  27 Vipers made it to Sarasota for the first of three Winter Series weekends, getting in 4 official races on Saturday and a bunch of fun sailing/racing later in the afternoon Sunday after the clock ran out at noon waiting for an early sea breeze. Old friends reunited back in Sarasota, welcoming new faces to the fleet as if they were long lost family. 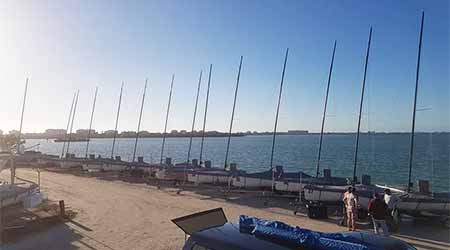 One of those new Viper teams very much impressed right out of the gate.  In a shifting 6-8 kt breeze in the first race on Saturday, Chris Stocke, Patrick Wilson, and John Wallace (in only their second day sailing the boat) launched off of the start and didn’t look back—finishing the first race with a commanding lead over a swarming pack of boats.  The finish of this first race of the series was awesome, with positions 2 through 23 were decided in less than 30 seconds.  Boat handling and positioning was key.  This race saw solid work from high-school senior Cam Farrah, sailing with her dad Cliff, finishing in 8th place in a very talented cluster of boats, and Van Sheppard, who started sailing his Viper at last year’s Winter series finishing in 6th place.  This first race was just the start–the level of talent in the fleet assembled was apparent all-day long.  Extremely close roundings were the norm on all legs of the course and any missed shifts cost multiple positions in the shifting fleet.  After the last race of the day was shortened when the breeze shut off, Viper 298 held on to the top spot, with only 2 points separating them from 3rd place. 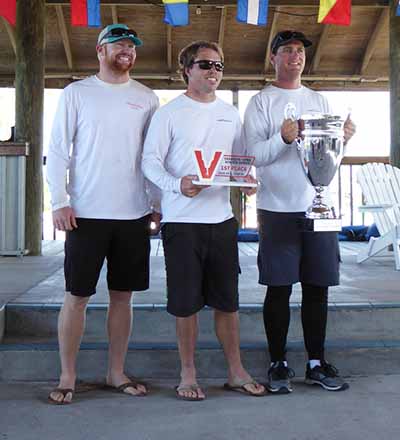 As the sun began setting over the gulf, the entire fleet enjoyed a fun tow in to the Sarasota Sailing Squadron, listening to music, looking for dolphins and meeting all of the new faces in the neighboring tow boats.  There’s something magical about having boats without motors:  being dependent on help from others leaves no excuses for not getting to know other people in the fleet.  The camaraderie continued ashore around a delicious BBQ cooked in the outdoor kitchen of the Squadron with the frosty beverages being provided from the Hooligan trailer.  The fun only continued into the night because you can’t take the 10-year-old out of the Viper Sailor.  After the adventure removing a real live Cottonmouth from Jay (possibly our most Ophidiophobic sailor) and Dale Pokorski’s Haulin’ Asp, which was followed playing with Eric Vigrass’ new drone, the fun continued in St. Armands Circle well into the night. 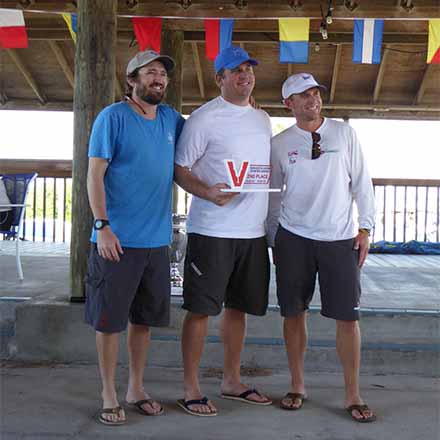 The fleet woke up Sunday morning and shook off the previous night’s blurriness over breakfast sandwiches at the ‘baitshop,’ the de-facto start to any proper sailing day in Sarasota.  As the Viperers enjoyed their bacon, egg, and cheese sandwiches while assessing the race course, the pace began to slow slightly.  The water was patchy, and the frontal clouds from the day before were still lingering—a sea breeze may not show up early enough to get a race or two in.  After several failed attempts to build, the sea breeze all but stopped at noon—prompting the PRO (the always  amazing Judy Hanlon  backed by a host of fantastic Sailing Squadron member volunteers and vessels) to call the racing for the weekend and hand the podium to Chris, Patrick, and John in first place ( with Chris and Patrick each driving two of the races!) , Cajun Underwriting (Marcus Eagan, Andrew Eagan, and Jackson Benvenutti) in 2nd place, and Great Scott in 3rd place (Danny Pletsch, Peter and Rachael Beardsley). 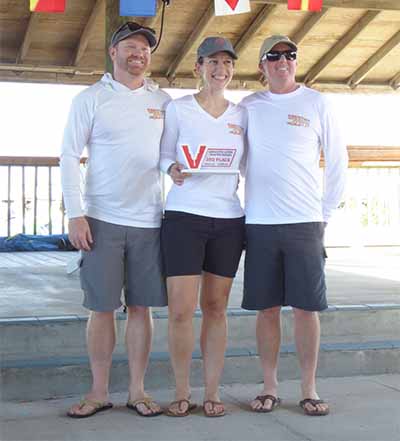 Additional commentary from Peter Beardsley on the Forum HERE.

Having the official racing being stopped for the weekend didn’t keep 10-12 Vipers from casting off from the Squadron docks and getting in some short course racing out on the bay (support by the pick up RC team of Mark Liebel, Mike Meighan, Alan Staniforth and Nick Lovisa.  With the wind building up to 9-11 kts, several hotly contested starts and short informal races were held during the afternoon.  Crew work, starts, and mark roundings were practiced, but most importantly the fleet just had some fun December sailing in great Florida conditions (70’s, sunny sea breeze)! 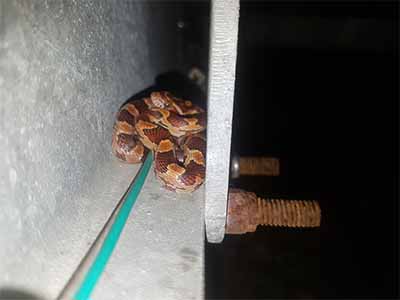 If you have not yet committed to getting your Viper down to Florida for the January and February events in Sarasota, get on it NOW to join in the fun! There’s lots of great racing to be had this winter in Sarasota, followed by Miami in March for Bacardi…. Then plan to hit Charleston and Annapolis to continue the fun!

Viper Winter Cup – March 3-4  NoR to be posted shortly