The Viper 640 Class held its North Americans this past weekend at Gulfport (MS) Yacht Club. Over the four days, a total of 13 races were run in conditions that ranged from 4-5 knots on the first two days to 10 – 14 knots on the final two. In the end, Jackson Benvenutti, Andrew Eagan, and Chris Alexander (USA 296) walked away with the championship. It should be noted that Jackson and Andrew crewed for Andrew’s brother, Marcus, when they won the combined North American and World Championships in Long Beach, CA, in 2019. 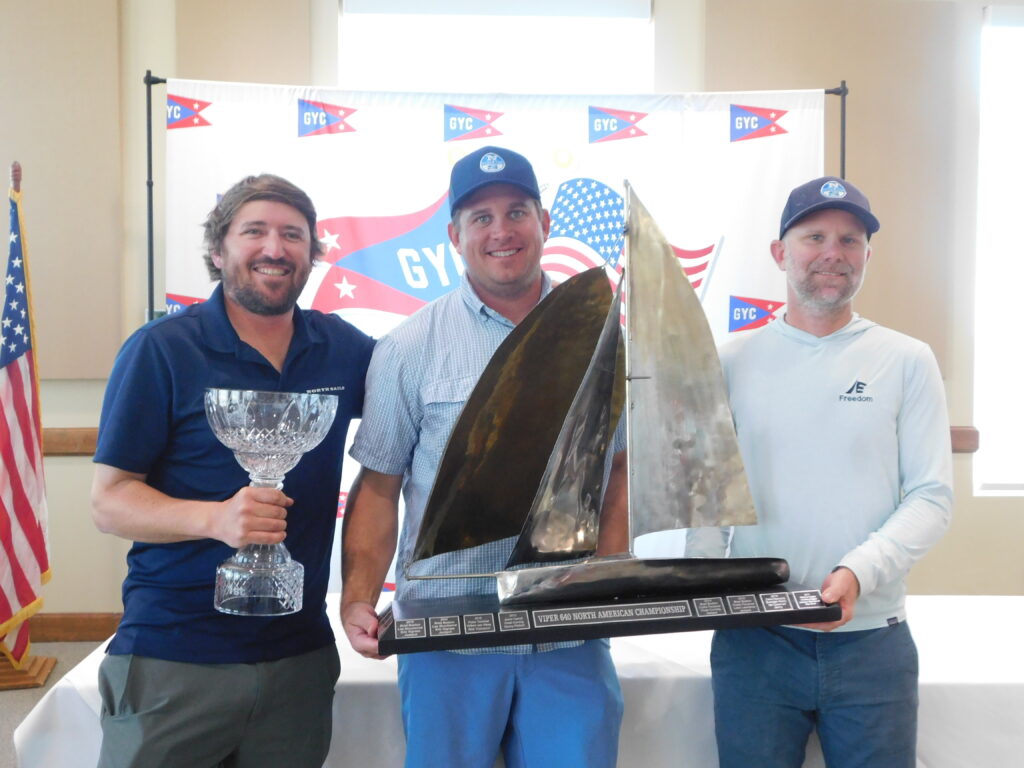 Over the first two days, Benvenutti’s team was flawless scoring seven consecutive wins. Over the last two, they added two more ending with 19 points with nine bullets, a second, and two fourths. With the leader “over the horizon” points wise, the keenest competition was for the other top podium spots. Going into the final day, there were four points between Mark Zagol, Tim Desmond, and Drew Buttner (USA 158)in second and Jay Rhame/Peter & Rachel Beardsley (USA 269) in fourth. Sandwiched between the two were Marek Zaleski, his father Chris, and Jacob Bradt(USA 237). The final sport came down to the final race.

Throughout the weekend, when the wind was out of the east, as it was on Day 4, the play was to go left into the beach upwind and then to the same side downwind. On Day 2, Zagol won three of the four races using that strategy, particularly hitting the downwind layline before gybing. Today, however, the platy was to gybe onto port mid-leg and get to the south for greater pressure. This paid off for Rhame/Beardsleys as they were able to move up from fourth to third, overtaking Marek Zaleski’s Team Z.

Jackson Benvenutti’s take on this win was heartfelt. “I’ve sailed a lot of boats and even won the Viper Worlds and NAs before…but always in a crew position. This year, I wanted to give it a try as a helm. I can’t tell you how happy I am with this win. That said, I couldn’t have done it without Andrew and Chris keeping me in the right places on the course and keeping the boat going fast. In addition, as I said during the awards ceremony, as a sailmaker I get to sail in a lot of classes; however, I love being part of the Viper 640 class because of all the great people I get to sail against.”

The Viper 640 North American Class Association would like to thank the Gulfport Yacht Club, Event Chair Sam Vasquez, all the volunteers and sponsor for hosting both the Women’s/Youth NAs last weekend and the NAs this weekend.

Next up is the US Sailing Adult Championship being sailed next weekend in Vipers at Bay Waveland Yacht Club, the four-part Southern Yacht Club Viper Winter Series, and the 2023 Viper 640 Worlds being hosted by Southern from March 27-31.