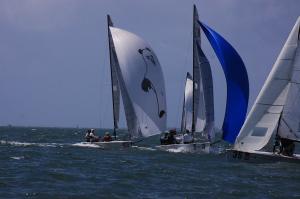 Heading into Saturday, Boston’s Jackpot held a narrow one-point lead over the second and third place teams, led by former Finn ace and US National Team member Geoff Ewenson aboard Terminally Pretty, and British international qualifier and multi-class champion Lawrence Crispin and crew.  Former Class President Peter Beardsley’s scrappy Ghost Panda squad sat fourth, only two points off the podium.  Saturday’s first race saw a light NNW breeze that died to less than 5 knots as the race went on, with the top 4 teams duking it out around the leeward mark.  While Boston and Crispin opted to go right up the second beat, Ewenson seemingly took a flyer hard left, while Ghost Panda played the middle.  When the pressure filled in from the left, Ewenson had gone from fourth to first with a 200-yard lead, and Beardsley third to second, putting Ewenson atop the leaderboard, three points ahead of Beardsley, with Boston and Crispin tied only a single point back.

With the lighter breeze, many teams pulled mast blocks and took turns off the rig before the start of race two in search of more power.  However, the weather gods decided to deviate from the forecast and send sailors out in style.  Five knots quickly became 14 knots, gusting to 18 after the start of race two, leaving most teams overpowered.  Ghost Panda tore down the run of Race 2, going from eighth at the weather mark to a commanding lead at the leeward mark with boatspeeds touching 14 knots, and the race win, combined with Ewenson and Crispin sailing new drop races of 12 and 9 respectively, moved Beardsley into the lead by two points over Jackpot heading into the final race.   The two teams sparred prestart in what turned out to 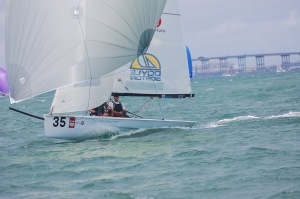 be a general recall, and in the restart, Beardsley and team pushed hard to the pin and pulled the trigger a fraction of a second too early with the “I” Flag flying, while Boston and team got off cleanly near the middle of the line and used excellent boatspeed to round in the top pack at the weather mark.  Boston extended down the run to make the championship result a foregone conclusion.  With Ewenson and Crispin also toward the top of the fleet, the only remaining question was how the podium spots would sort out.  Beardsley rounded the first mark in 18th, but steadily ground back, passing six boats on the final run to salvage a fifth and the second podium slot, and when Ewenson edged out Crispin across the line, Team Terminally Pretty locked down third.  Crispin and company were the top Corinthian team in fourth place overall.

Bacardi Miami Sailing Week is also the championship regatta in the EFG Viper 640 Pan-American Series.  With a number of qualifying events over the prior 11 months, teams travel to Miami, carrying a limited number of points forward count toward the overall score in Miami.  Boston, Beardsley and Crispin each placed in the top 20% of the fleet in a qualifying regatta, earning them a single point to carry into Miami, though Ewenson’s DNC in the qualifying series pushed him to fourth.

Miami 2015 will be remembered for the year where the Viper fleet first broke 30 boats in Florida, the warm temperatures that put smiles on faces of winter ravaged teams, solid breeze, good parties, and excellent competition. 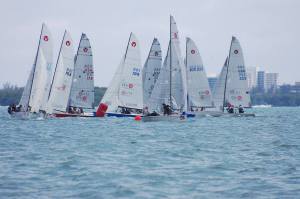 After a rollicking day on the water Thursday, Friday’s conditions were very different. The choppy seas flowing from the Southeast were replaced by relatively calm waters allowing the crews to apply light air trim and boat handling techniques. With windward/leeward courses set with 0.8 mile legs, the leader board found the top teams trading places. Phil Lotz and crew did a horizon job on the fleet in the first race with Crispin, Ewenson, and Boston finishing 6, 9 and 8, respectively. In the final race of the day, it was Brad Boston who put on a show winning the race and taking the lead for the regatta.

After racing, teams gathered outside Phil Lotz’s Viper 155 for a debrief and tuning discussion, with Phil, Wendy, and coach Luke Lawrence having a 30-minute Q&A for participants on the dock.  Then it was off to the BACARDI tent for hydration and additional learning around videos and photos taken by the North Sails Performance Analysis team.

After six races, reflecting a throw-out score, the regatta and the EFG Pan-American Championship is still far from decided as only one point separates the top three boats: Boston with 13 points and Ewenson and Crispin tied with 14 points. And don’t count out Peter Beardsley who won the day with a 3,2 and sits in fourth with only 16 points or Team Lotz in fifth with 21 points. Tomorrow’s conditions are forecast in the 10-12 knot range with three races anticipated. 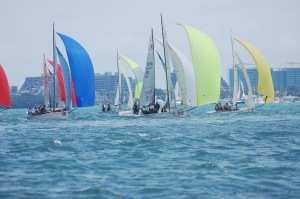 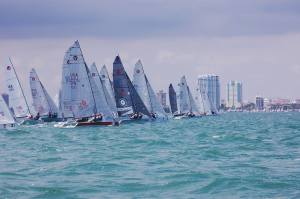 Thirty two Viper 640 sport boats headed out from Coral Reef Yacht Club Thursday morning for Day 1 of Bacardi Miami Sailing Week sponsored by EFG International. After having sailed the final EFG Pan-American Championship qualifying regatta the previous Sunday and Monday, the EFG Winter Cup, the fleet was primed for an outstanding Bacardi Miami Sailing Week. The first day included four races, sailed in winds ranging from 10 – 16 knots. At the end of the day, Lawrence Crispin from the UK, sailing with his son Luka and Hector Cisneros, stood at the top of the leader board two points ahead of Geoff Ewenson from Annapolis, MD, racing with Lara Dalman-Wiess and Peter O’Learay. Four-time Viper North American Champion Brad Boston, from Sarnia, ON, sailing with Lee Shuckerow and Nick Loudsbury, stood in third place.  Racing was extremely tight all day, with four different teams winning the four races.

The Coral Reef Yacht Club Race Committee headed by PRO Judy Hanlon set 1.1 mile courses in the northern circle in the middle of Biscayne Bay with minimal course resets necessary as the wind direction was constant. Although the races were under an hour in length, the sailors had enough work to do upwind keeping the boats flat and hanging on downwind as some wild reaching rides were enjoyed.

With a long day of racing in the books, the Viper fleet met at the Peacock Café Grille for a Mid-Winter fleet dinner including award presentations for the EFG Winter Cup. Organized by Viper Executive Committee member Steve Chapman, over 90 sailors, EFG dignitaries, CRYC Race Committee, and guests enjoyed a gourmet meal while being serenaded by an outstanding jazz quartet.

At the conclusion of the evening, Viper 640 Class Administrator Buttons Padin handed out appreciation awards to EFG’s Keith Gapp, for his continued support of the Viper Class Association, as well as to Craig and Deb Wilusz and Don and Tracy Faircloth for their leadership in the Class’ Gulf Yachting Association selection campaign. Special recognition was also given to young Lucy Salter, sailing in her father Rob’s crew, with Padin noting that Lucy had to obtain special permission to miss a week of high school in the UK.