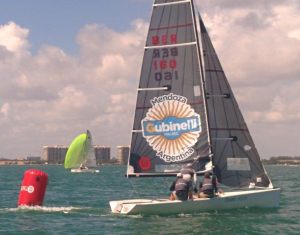 Somers Kempe, Butch Agnew and Adam Barboza grinding down the fleet in Race 6 on Monday en route to the Winter Cup title.

Miami is known as the gateway to Latin America.  For Viper sailors, it may also be the jumping off point for points east.  If you hailed from an island in the Atlantic Ocean, you probably did well at the 2015 EFG Winter Cup.  Bermudians Somers Kempe, Butch Agnew and Adam Barboza never won a race and were over early in the penultimate race, but scored four seconds to edge Lawrence Crispin’s team from England by two points.  Racing was extremely close, as third and fourth were only a single point out of second, with Ireland’s Anthony O’Leary beating Peter Bauer’s Wild Hogs team on a tiebreaker.

Crispin won the first race of the day in an 8-12 knot easterly with plenty of oscillations.  Bauer took the second race, and when Kempe struggled to an 11th after being over early and O’Leary’s Day 1 luck began to fade with an 11,9, Crispin went into the final race with a 4-point lead.  But Kempe, sporting the most Viper experience of the teams in the top 3, pulled out yet another second place result in the final race, and managed to put six boats between himself and Crispin to take the title.  Bauer’s team won the day overall by a single point over Bermudian Doug DeCouto, who placed second on the day with a 5, 3, 1 to move up to fifth overall.  DeCouto took delivery of a brand new Viper # 233 in Miami, that he plans to ship back to Bermuda after the event to make 6 Vipers on The Rock.  The Wild Hogs were the only team to keep all of their scores in the single digits, showing how competitive the fleet was throughout the weekend.

Tuesday brings the fabled Viper Scorch and a boozy brunch for some at No Name Harbor, before Wednesday’s tuning day heading into the PanAms on Thursday.

Final results are posted at http://forum.viper640.org/index.php?action=dlattach;topic=1813.0;attach=2256

More photos from the 2015 EFG Winter Cup are posted on the Viper 640 Facebook page, and the full Day 1 report appears below. 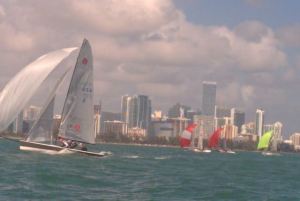 Anthony O’Leary and his crew from Ireland put on a clinic on the first day of the EFG Winter Cup Regatta for the Viper 640 Class. After placing fifth in the first race, O’Leary and crew shifted into high gear and won the day’s final three heats. Sailing in a brand new boat provided by Rondar Raceboats to international qualifiers that was unloaded from the container just a few days earlier, and with the team having only a few hours in the boat before the event, this was quite an achievement. That said, O’Leary, having been named Irish Sailor of the Year in 2014 and sailing with long-time shipmates Dan O’Grady and Tom Durcan, proved up to the challenge in champagne sailing conditions on Biscayne Bay.

Five points behind the leader stands the Bermudian team of Somers Kempe. Butch Agnew, and Adam Barboza. With top three places in the first three heats and a sixth in the day’s final race, Kempe’s boat was hooked-in for good speed and tactics.

The wind was from the east blowing at around 15 knots when the fleet got to the course. Starting with a course of 100 degrees, the Vipers and the M32 Catamarans worked through each other’s race courses, giving new meaning to go-fast.   British team Bubbles in GBR 225, helmed by 1985 Laser World Champion Lawrence Crispin, won race 1 in the windier conditions.  After two races, the wind had backed slightly and the wind moderated and backed further, lightening to about 12 knots for the last race.

Scott Gerling and his race committee from the local Biscayne Bay and Coral Reef Yacht Clubs showed what solid race management was all about. Excellent starting lines and well positioned windward marks led to good, fair racing for all. 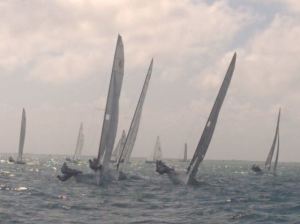 Tied for third place are two northeast teams: Peter Bauer, Buttons Padin, and Doug Lynn stung together results of 3,4,5,8 while fellow Larchmont Yacht Club/Storm Trysail Club members aboard DragonFire Byron LaMotte, Andrew Weiss, and Jonathan Asch scored a 9,2,7,2. The DragonFire team planned to fly back on Monday to miss the second day of the regatta before coming back for the Pan Americans on Thursday, but snow in the northeast and the resulting delayed flights may allow the Dragons a shot at the podium.

Monday’s racing will conclude the EFG Winter Cup, with another four races scheduled for tomorrow. With 18 boats racing, it was a record turnout for the EFG Winter Cup, an event that only began two years ago as the final qualifier for the EFG Bank Viper 640 Pan American Championship. Tuesday the Class will hold the Miami Scorch with BACARDI Miami Sailing Week sponsored by EFG International to be raced Thursday – Saturday, with the Viper winner taking home the coveted EFG Bank Pan American Championship.

More photos from Day 1 are posted on the Viper 640 Facebook page.