It started out as a day when nobody was expecting to race due to a dire forecast of very light winds.  All the weather models called for 3-4 knots and then even less. After a two hour shore postponement, PRO Sandy Grosvenor (Annapolis, MD) started the first of three light air races in the middle of Long Island Sound off Noroton Yacht Club (Darien, CT). A light 5-knot southerly filled in at about 1300 and the 2021 Viper 640 North Americans were off and running. Well, maybe not running!

“The key today, was to get off the line cleanly and connect the dots of breeze,” said Jay Rhame sailing with his boat partners Peter and Rachel Beardsley in GREAT SCOTT! “In the first race, we were boat-third at the start and tacked out to the right early. We found that there was more pressure to the right and less ebb tide and we were there first. We put our bow down and just sailed as if it was a drag race.” Rhame and the Beardsleys lead the day after three races with a 1-5-2 line score for eight points. Just one point back is Mark Zagol with 10 points, who is sailing with Tim Desmond and Drew Buttner. After a pair of fourth-place finishes, Zagol won the third race by two boatlengths over Great Scott! after late gybing duel. 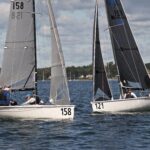 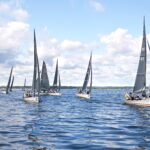 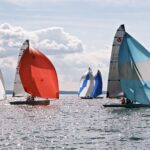 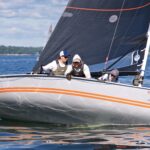 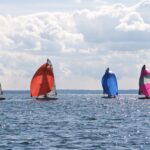 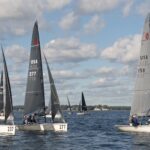 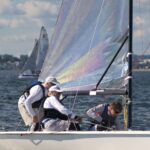 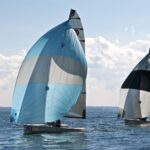 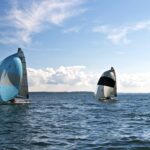 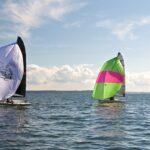 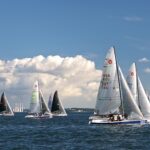 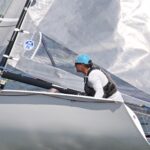 The tight pack at the top also includes Ted Ferrarone, Cardwell and Jennifer Potts, and Meredith Killion in third place (6-1-4) just two points behind Zagol. Then, in fourth place with 13 points (7-3-3) is Bill Vickers, Jim Lodico and Tim Williams. While it appears these four boats have a tight hold on the lead, tomorrow’s equally light forecast could turn the fleet inside out. Saturday and Sunday have forecasts more to the liking of Viper 640 sailors, in the mid-teens with stronger puffs.

With the very light and variable winds today, the ebb tide became a significant factor. In fact, after numerous boats “kissed” the windward mark, competitors took the caution to round with a generous amount of caution so as not to have to do a penalty, in light air.

With the wind constantly shifting, predominantly to the right all day, and with a strong ebb tide, PRO Grosvenor “walked” the windward/leeward courses using leeward and upwind leg course changes to give the sailors a more balanced course from a time on port/starboard basis. In the end, this worked well over the three races completed.

Racing is scheduled to resume again tomorrow at 1100. We’ll see what the weather gods have in store for the Viper 640 2021 North American Championship.