By Dan Tucker and Paul Young of Rondar Raceboats

Most people are better off bending a Viper spreader bracket back into shape if possible, rather than drilling it out to replace it.

If the spreader bracket is bent upwards or downwards fairly gently, ie not a sharp bend, then I would bend it straight and carry on, because the disruption to the mast tube to drill out the rivets and change the bracket will be greater. If the bracket has a sharp kink sufficient to raise stress fractures, or has bent due to the mast inverting, then it should be replaced.

Stainless steel is actually capable of being bent without weakening itself dramatically, as you know from the amount of fittings in the marine trade that are made from folded stainless steel just like the Viper spreader bracket is. Carbon fibre masts are not like aluminum ones, you shouldn’t keep drilling out fittings and replacing them, as inevitably, every time you drill you super heat the metal rivet which in turn damages the resin content for the spar locally to the hole. When you drill out the rivets, then you should use cutting fluid to cool the tip, push really hard on the drill and blip the throttle so the torque cuts, and the drill does not spin at high speed, heating the metal and blunting the drill. You should just drill the head off and then punch the remainder through the hole, so you don’t enlarge the hole for the next rivet.

The current spreader brackets are a much heavier gauge steel, particularly the mast collar, as we had found some incidents of the earlier collar guillotining the rivets under inversion loading.

It seems that currently, many people are bending brackets on the crane arm, hooking a spreader while hoisting the boat. That once again proves that point that by strengthening one part (stronger spreaders), we largely succeed in pushing the failure point to another part (spreader bracket). There’s only so much we can do about those sort of mistakes other than reminding people to look UP while hoisting their boat, particularly as the season begins.

If you do need to replace your bracket

New brackets can be ordered from Rondar North America or Rondar UK.

These are specially designed to form a flat washer inside the mast, rather than to expand sideways in the hole, like a conventional rivet. It is very important when you change a spreader bracket or attach anything to the mast, that you use this type of rivet. A conventional rivet can actually split the mast along its fibres when it expands. 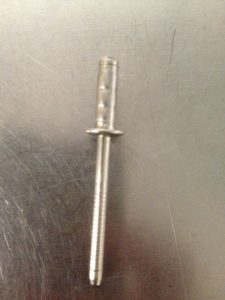 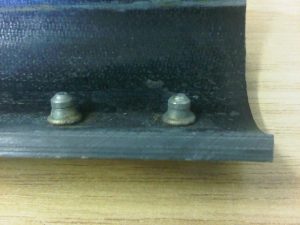