The 2 piece rudder mounts on older Vipers are subject to all kinds of forces and vibrations which cause the screws to loosen over time. Buy 1/4″ stainless steel lock washers – they were not fitted at the factory on most of the early boats. SPECIAL NOTE: Some early boats only had gudgeons with two mounting screws – consider having them changed to the new Rondar one piece style. You will need to provide a new backing plate, so consider having it done by a quality race boat shop..

On early boats (approximately #30 and lower but we don’t know for sure), the rudder post (affectionately known as “the stump”) was a separate component that was attached with epoxy glue onto the deck. If you have an early boat and you see signs of cracking around the foot of the stump…..Remove it and reattach it securely! This involves grinding and glass work…….but its better than losing your rudder going down a wave downhill.

On later boats the stump was built into the mold as an integral part of the deck and there have been no problems. Rondar has gone one step further and the rudder post is not only part of the mold, it also has an internal frame that attaches it to both the deck and the hull in a bullet proof manner. 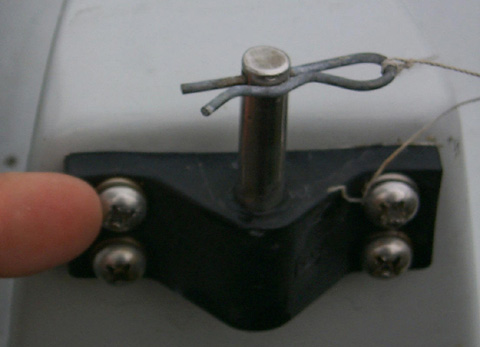